You might have heard of the Turkish coffee and for a good reason too. It is a unique coffee preparation and brewing method which belongs to Türkiye since Ottoman Empire. Turkish coffee has a distinctive taste, smell, foam and a presentation and it is a crucial part of the Turkish people. It is also the only type of coffee which is served with its coffee grounds still in.

Although, according to the researchers it is said that coffee spread to the world from Ethiopia’s Kaffa region in the 14th century which contains similarities with its name as well, one of the first uterances about the coffee was in 10th century by a physician named Abu Bakr Muhammad ibn Zakariya El Razi who is also known as Rhazes. It is claimed that at the early stages of coffee, it was used as a medicine though it evolved to be a common drink in time. 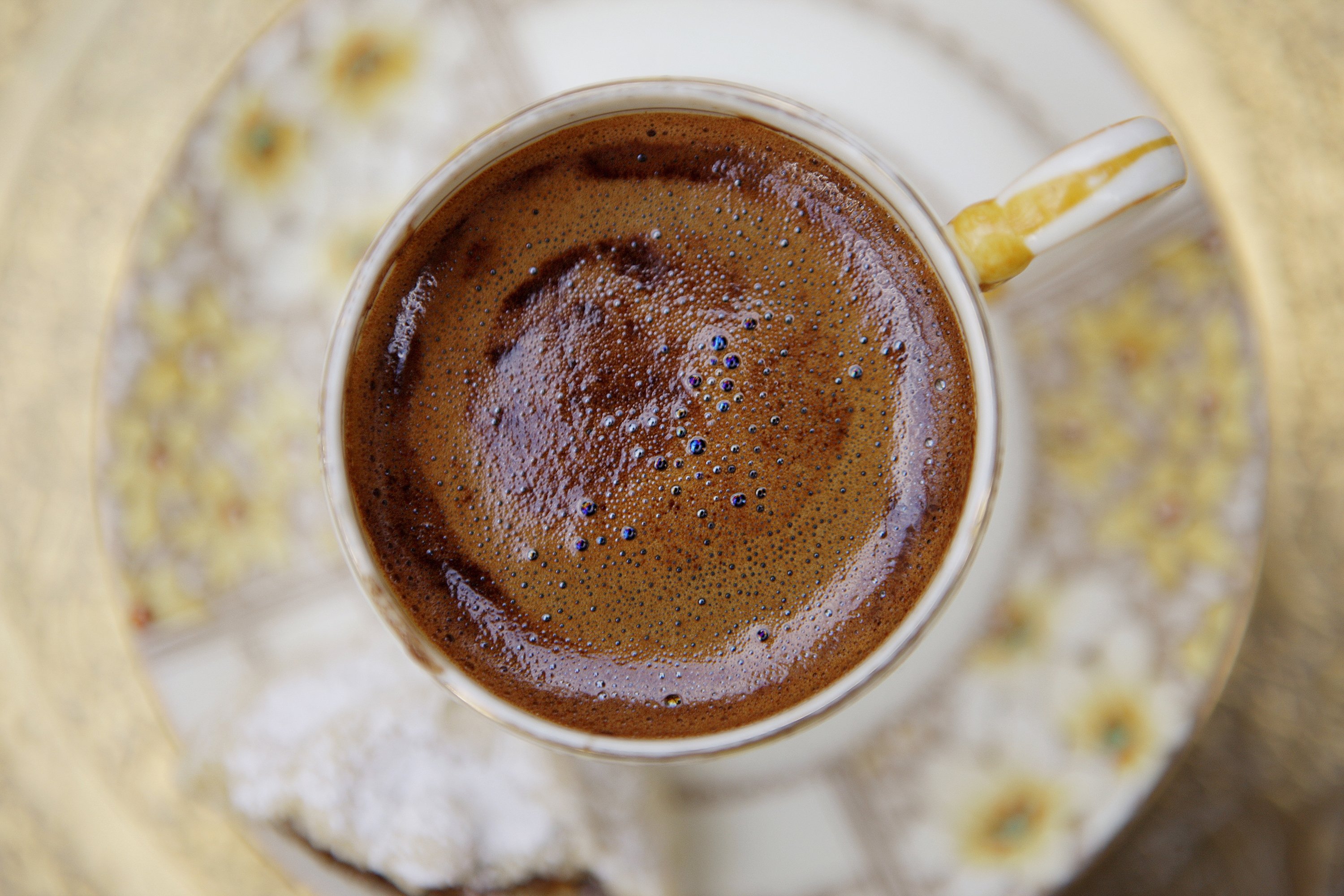 Turkish coffee culture and tradition dates back to the 16th century. It is known that coffee came to Turkiye with the scholars and travelers who have been in the Arabian Peninsula. With its gained popularity and coffeehouses, it was in no time one of the favorite beverages of the Turkish people. Turkish coffee has a special preparation and brewing techniques which makes it special. It is one of the oldest preparation and brewing methods that is still in use which requires specialized tools and silverware such as the boiling pot named cezve, coffee cup named fincan and dedicated mortar and pestles. These equipments are also generally not plain and they have artistic value as well. It has a long-lasting taste due to its preparation technique and its freshness. It is softer, more aromatic and more concentrated against other types of coffee and it is easily distinguishable with its aroma, foam and ground.

It is not only a beverage but also a communal practice which helps to bring cultural spaces, social beliefs and values together in a socialization process. In Turkish culture, Turkish coffee holds a very special place. Its role in social life can be tracked since the first coffeehouses. Coffeehouses were a place where you can drink coffee, share news, converse and socialize in. The saying “the memory of a cup of coffee lasts for forty years.” Represents the value of Turkish coffee in the Turkish culture.

It can be said that every Turkish people practices this tradition. It holds a special place in the Turkish culture so that even marriages can be decided with a Turkish coffee. Generally, this practice is passed to the new generations from their parents where it is taught informally with observation and participation and internalizes it as a Turkish life style. There are also experts on this craft as well. As an example, breakfast in Turkish is named “Kahvaltı” which can be translated as “meal before coffee” and being able to prepare a foamy Turkish coffee is considered a merit and holds an important place in Turkish culture especially for serving guests or meeting of the families. Turkish coffee fortune telling is also a widely known practice where a person tries to interpret the future by reading the coffee grounds after finishing the coffee, rotating the cup, making a wish and turning it upside down on the saucer to let it pour down and cool down.

How to Prepare a Turkish Coffee

Although it is fairly easier now, preparation of the Turkish coffee required several highly elaborated steps and skills originally. First of all, good quality fresh beans are required to be roasted and grinded in a mortar until the beans turn into a fine powder. Then, coffee powder and sugar (if preferred) are added to the cezve with cold water. Next, cezve is put on a stove and brewed slowly to ensure that foam is formed on the surface. Finally, it is served on the fincan with a glass of water and Turkish delight.

With its effects and importance on the Turkish culture, Turkish coffee plays a central role as a beacon of hospitality and friendship. Important guests are served coffee in special cups that are more elegant and elaborate than others to honor their dignity. The Turkish proverb “souls are after neither coffee nor coffeehouses; they are after close companionship; coffee is an excuse” expresses the importance of it to the social life.

It is an indispensable part of social occasions too such as engagement ceremonies, holidays and social calls. Even when the coffee was scarce the consumption of the coffee remained the same although replacing beans from other species such as chickpea, wild pistachio or date seeds and it proves that the Turkish coffee tradition is an indispensable deep cultural custom.

A Memory of 40 Years

Drinking and serving Turkish coffee always creates a chance for a unique social interaction even if it has a standard method because what makes it different from the other beverages is the company you drink with. It is about collecting shared memories together while sharing each other’s ideas, feelings, the bad or the good days.

Where Can I Experience It?

Kurukahveci Mehmet Efendi is a historic coffeemaker in Turkey since 1871 which only sells grounded Turkish coffee. In İstanbul you can find many branches of it.

Emirgan Tarihi Çınaraltı is another place where you can experience the Turkish coffee which overlooks the Bosphorus Strait. It translates as Emirgan Historic “underneath of the plane tree”

Bebek Coffee is a lovely café and tea/ coffee garden in Bebek İstanbul. With its open garden concept which is by the seaside, it is a must see stop.