The Best Turkish Banks and Their Stories

Turkish Banks have a long history but in the modern sense of banking dates back to the 19th century with the İstanbul Bank which was established under the leadership of Galata bankers during Ottoman’s reign.

What is a Bank?

Bank is a financial institution that accepts deposits from the public and creates a demand deposit while making loans. Banks play an important role in the economy of a country and so they are heavily regulated by jurisdictions. Most countries have institutionalized systems know as fractional reserve banking which holds liquid assets equal to the portion of their current liabilities. Banks are generally subject to set of capital standards set internationally by the Basel Accords.

As a concept, modern banking was evolved in the 14th century in the prosperous cities of Italy but continued with their roots from the ancient world on the concepts of credit and lending although there was no modern Turkish Bank until the 19th century. Throughout the history, some banking dynasties such as Medicis, Fuggers, Welsers, Berenbergs and the Rothschilds have played a central role over many countries. Currently, the oldest existing retail bank is Banca Monte dei Paschi di Siena in Italy, Siena while the oldest existing merchant bank is Berenberg Bank in Germany, Hamburg.

It is predicted that concept of banking may have begun in Assyria and Babylon with merchants offering grain as loans to be collateral while bartering. There were two important innovations during ancient Greece and Roman Empire namely deposits and changed money. Also, archeology from this period also shows evidence of lending in Iran, China and India as well.

How Does a Bank Work?

In its essence, banks control the deposits and draws of the customer within their own framework. Banks are known to use cheques, automated clearing house, wire transfers, telegraphic transfers, EFTPOS and automated teller machines. Banks also borrow money by accepting funds and lend money which Is called loans.

History of Banking in Türkiye

The industrial revolution started in Britain and in time increasing productions which led to loans in spread to Europe. With this development, financial transactions rose and leading to central banks to be developed. During Ottoman Empire’s reign, banking sector was a late bloomer due to the religious reasons such as interests being forbidden and underdeveloped industry.

The first Turkish bank was Banque de Constantinople – Bank of Istanbul - which was established under the leadership of the government in 1845. Apart from it, some of the early Turkish Banks were Ottoman Bank founded in 1863 and Ziraat Bank founded in 1863 which still operates to this day. 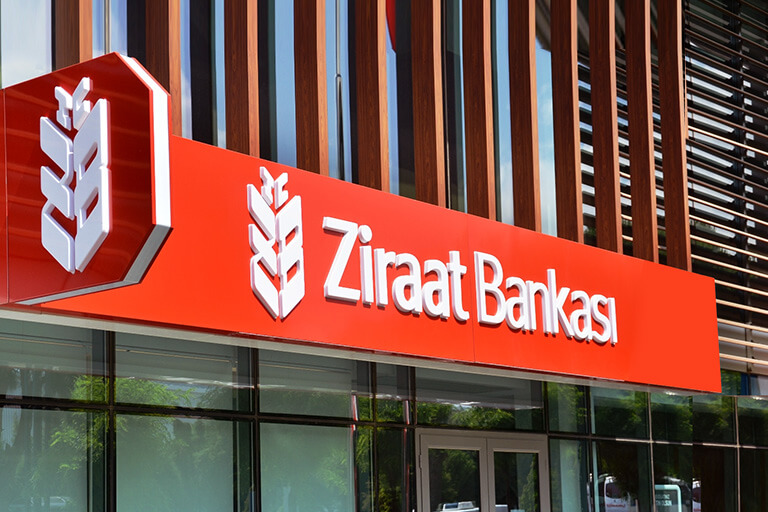 Ziraat Bank was founded in 1863 to fill a need to own a national bank since its embracing of the western trade and with it, the operation of foreign banks in the Ottoman Empire. There was not enough funding for a national banking system to be formed and farmers who need loans were depended on the loan sharks. Under the leadership of Midhat Paşa, it was first known as “Memleket Sandığı” which translates to “State Chest” resembling a type of public funding, then it was formally converted to an institute named “Ziraat Bankası” which means “agricultural bank”.

In 1924 after the Independence War, Ziraat Bank became a joint-stock company with a law introduced. - In 1988 as a first time in history, a region of Turkiye was supported with favorable credit options under the GOP (Southern Anatolia Project) initiative.

In 1989 first credit card and first consumer loan were given and also gold sales started. The first mutual fund of the Ziraat Bank was set up.

Halkbank is state owned Turkish bank which was founded in 1938 to give cheap credit to craftsman an industrialist. It is 159. Biggest bank in the world with 128.480 million active growths. It was established with the numbered 2284 “State bank and public chest” law dated 1933 following Mustafa Kemal Atatürk’s ideas that providing industry and business owners with favorable credits to boost development and growth under normal circumstances. It was announced that %51.11 of the bonds who belong to government to be transferred to the Turkish Wealth Fund in 2017.

It was established in 1954 as a state owned Turkish bank to utilize the funds to the best of its ability, to help the country save money with ideals of the modern banking and using the savings on prosperity and development with 50.000.000 capital. %64 of its stock belongs to the Turkish Wealth Fund while Ministry of Treasure and Finance holds the %20.57 of its stock.

It was established as a private Turkish bank in 1948 in Adana by a group of businessmen including Hacı Ömer Sabancı to finance the cotton producers in the region. Akbank won the” Türkiye’s Most Valuable Bank Brand” 6th time consecutively in the research led by Brand Finance about “Worlds Most Valuable 500 Bank Brands” and it scored 94. Spot on the 500-bank list.

It is the biggest private Turkish bank that provides individual and commercial banking in Türkiye. It is the first national bank of the Turkish Republic which was established in 1924 with the order of Mustafa Kemal Atatürk. According to The Banker magazine, it is 181. Biggest bank in the world. İş bank has more than 2000 branches, 6.476 ATM’s and more than 22 thousand personnel. Started with 250.000 lira capital, soon İş Bank started developments which the country needed too such as sugar, glass, mining, ports, coal and much more and merging with İtibar-I Milli Bank, increased its funds to 4 million in 1927. İş bank played a crucial role to raise awareness on the savings instead of wasting. They brought the first piggybanks to Turkiye in 1928 as a part of their visions.

Previously named Garanti Bank was a private Turkish bank which was established in 1946 in Ankara. Since 2014 with its consolidated active growth reaching 107 billion USD, it is the second biggest private bank in Turkiye. Since 2020 Garanti BBVA has 884 branches in Türkiye, 7 in Cyprus and one in Malta, with total 8 overseas branches. Garanti BBVA is among the Banco Bilbao Vizcaya Argentaria which is a Spanish owned group. The stocks of the Garanti BBVA are traded in Türkiye while its warehouse certificates are traded in US and UK. According to the date from 2020 the net profit of the bank is 6 billion 385 TL while its active growth is 411 billion 161 million 696 thousand TL.