Türkiye is a gastronomy heaven for the food lovers. Turkish cuisine, with a vast selection of ingredient and years of cumulative experience, offers everything a food lover can want ranging from breakfast, desert, red and white meat, drinks, vegan and vegetarian options to fast food and much more. If you are hungry and want to have a good meal, there is something for everyone in Turkish Restaurants.

Michelin guide is a series of books that have been published by the French tire company Michelin since 1900. The guide awards up to three Michelin stars for excellence to select a few establishments. Meaning of the stars are as follows:

And lastly the bib gourmand award which is given to the restaurants which offers “exceptionally good food at moderate prices”. The name bib gourmand comes from the company’s nickname “Bibendum” for their mascot “Michelin Man”.

Michelin Guide Was in İstanbul 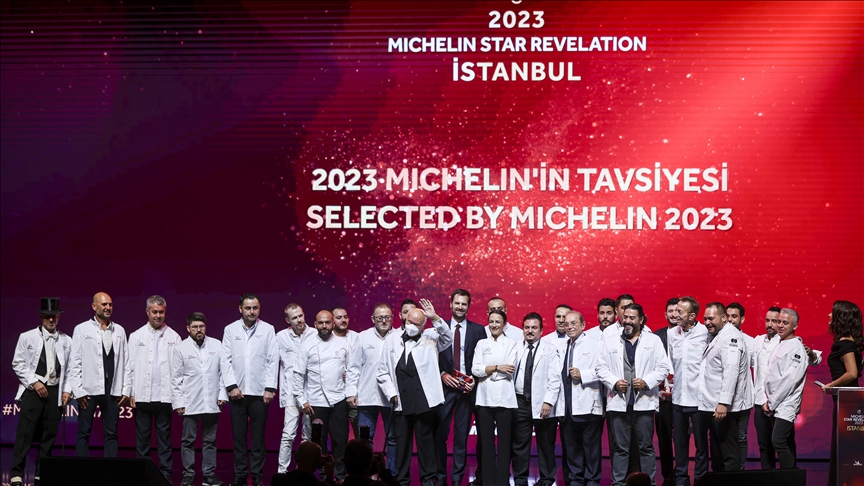 In 2022, Michelin Guide selected İstanbul for its thirty eighth destination and reviewed the applicants for the Michelin Star. After the reviews there were fifty-three restaurants chosen in İstanbul. These restaurants were announced with a special awards ceremony. These awards will help to introduce these unique local restaurants and their love for the food to the world.

With a two Michelin Stars, Turkish chef Fatih Tutak was the highlight of the award night. His restaurant is in Şişli which is in the European Side of the İstanbul. Fatih Tutak takes the Anatolian delicacies and reshapes them with his own style by deep diving into the roots of the traditional Turkish cuisine and making sure that every plate has its on character. Every plate is specially handcrafted like a masterpiece in this fine-dining restaurant.

This Turkish restaurant is where Chef Maksut Aşkar specially crafts the traditional Turkish cuisine with his characteristic touches. It was awarded one Michelin Star at the award night and its delicacies can be a bridge between past and the present for the future generations. You can experience Anatolia in every plate in Neolokal.

Nicole is located in on the top floor of an apartment named Soeurs Garde-Malades (Nurse Sisters) where Franciscan Nuns used to live in 1901. The restaurant which was named after one of the old owners Sister Agnes Marthe Nicole is led by the Chef Serkan Aksoy provides a unique experience to their customers by blending the traditional Turkish cuisine with a contemporary approach. The chef who began his career in Bodrum is still keeping in touch with his local suppliers for sustainability and local support meanwhile providing this Turkish restaurant with top grade ingredients.

Being one of the most liked restaurants in İstanbul Beyoğlu, the Mikla is providing its customers with unique tastes since October 2005. Mikla blends the cumulative Turkish and Scandinavian cuisine experiences with a strong characteristic. The name “Mikla” comes from the Viking name for İstanbul and it connects the two cultures together. With the variety and the richness of its menu, Mikla and Chef Cihan Çetinkaya provides a refined experience for their visitors together with a fantastic view of İstanbul.

Established by Chef Pınar Taşdemir, Araka is a Turkish restaurant in one of the streets of Yeniköy where it leads to the seaside. With its seasonal greens and health-giving herbs, its menu is a highly specialized and personalized one. For those who love vegetables, this restaurant is a must see.

Given for being a pioneer in a better, sustainable world the Michelin Green Star inspires both the customers and the other restaurants for their understanding of gastronomical sustainability. There are 381 restaurants in the world who was awarded with the Green Star.

In İstanbul Neolokal won the Michelin Green Star for their understanding and the actions for a better, sustainable cuisine and a world. In this Turkish restaurant, every ingredient is carefully selected while protecting the Turkish delicacies which are under risk of being lost.

Mevlüt Özkaya at the Mürver won the Young Chef Award at the age of 33. He has been leading the Mürver for two years with a commited kitchen team to excellence. The inspectors were impressed by his distinctive and precise cooking style which included wood fire as well. Meanwhile the Michelin Service award presented by Mastercard went to Sunset Grill & Bar team. According to the Michelin Guide: “Art of hospitality is defended by true professionals, with a deliciously olde-worlde style in which diners’ comfort and well-being are absolute priorities.” and “one of the best wine menus in the city” said by the inspectors.

10 restaurants were awarded with bib gourmand in İstanbul which offers a great selection by highlighting Turkish restaurants with great food for a reasonable local price. Some of these restaurants are:

Pandeli: For the fans of traditional Turkish cuisine located just above Egyptian Bazaar with a blue ceramic décor.

Karaköy Lokantası: The restaurant which won the inspectors with its “superbly executed” mezze has a “exceptional quality-price ratio”

Alaf: With a fashionable ambiance and many special cocktails to offer with its magnificent dishes, it is a good choice.

Calipso: Placed in the Asian side, it is an excellent fish and seafood restaurant with fragrant salads and delicious mezze.

The selection of the MICHELIN Guide Istanbul 2023 at a glance

- 4 restaurants with One MICHELIN Star;

- 1 restaurant with a MICHELIN Green Star;