A Guide to Winter in Turkey

Turkey is a magical place in winter experiencing snow and rain on the one hand, warm and dry weather on the other hand. Due to its geographical location, Turkey has a big land mass and this causes different weather patterns to be seen throughout the country in the same season. There are also places that you can experience very different weather conditions in a day as well.

Turkey is generally is not too cold or too hot in winter but the dramatical changes can be observed moving from one region to another. There are seven geographical regions in Turkey including Aegean, Black Sea, Central Anatolia, Eastern Anatolia, Marmara, Mediterranean and Southeastern Anatolia. These regions all have their own typical weather types and we can see the difference between them clearly.

Starting from the Aegean Region, it is located on the west of Turkey near the Aegean Sea including cities like İzmir, Balıkesir and Muğla. The climate is hot with mild to cool wet winters on the coast while it experiences cold and snowy winters in the interior. Average temperature is around 6-8 degrees Celsius.

Then we have Black Sea Region with cities like Trabzon, Düzce and Ordu on the north of Turkey coasting the Black Sea where it takes its name. It has an oceanic climate with high and even rainfalls with cool and damp winters. Snow is common in this region so; heavy and long snows can be seen. The average temperature is 4 degrees Celsius.

Central Anatolia Region is one of the coldest regions in Turkey with a 1-degree Celsius average on February. It is located on the center of Turkey with cities like Ankara, Nevşehir and Kayseri.

Eastern and Southeastern Anatolia which includes the around a third of Turkey has harsh weather conditions such as long winters and hot summers with dry climates although it often varies depending on the specific location since some areas in the region have different microclimates. 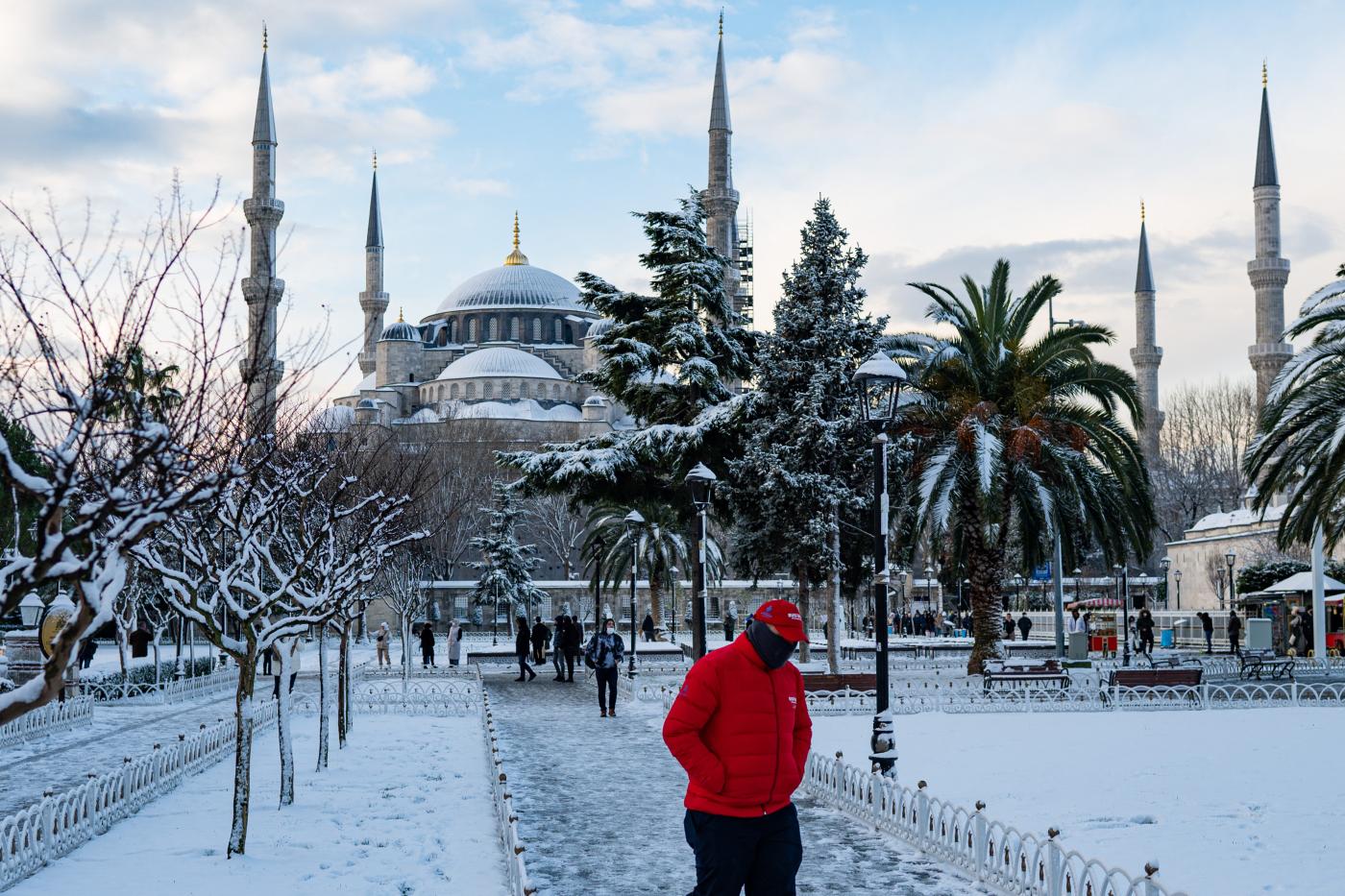 Marmara region which is mostly known thanks to Istanbul is located on the northwest of Turkey with Aegean, Marmara and Black Sea surrounding the region. It has a Mediterranean / Humid subtropical climate which experiences warm to hot summers while wet and sometimes snowy winters can be seen. The coastal climate keeps the temperatures relatively mild with 10-degree Celsius average.

Located on the south of Turkey, it is on the coast of the Mediterranean Sea where it takes up its name after. Antalya, Adana and Mersin are the most famous cities that are in this region. Mediterranean Region has a Mediterranean Climate with hot and dry summers and mild to cool and wet winters. Average temperature in this region in February is 14 degrees Celsius.

Why Visit Turkey in February?

There are plenty of reasons to visit Turkey during the winter. First of all, Turkey has a beautiful winter season which can be experiences mildly unless you seek a very cold environment. For example, in the Mediterranean Region, the temperatures are so mild that you can sometimes skip wearing your coat all together.

Secondly, Turkey in February is quite cheap due to being out of tourism season. You can find accommodation in your favorite places quite easy and quite cheap unless it’s for winter tourism such as skiing at Uludağ!

Last but not least, there are much fewer crowds around the whole country in February, even at super popular spots such as Cappadocia and Ephesus so you can enjoy the full beauty of these places unbothered and away from the crowds.

What to do in February in Turkey?

There are countless opportunities in Turkey to do during winter. It is a very romantic season with magical sights to see covered in snow and rain. If you wish, you can warm by the fireplace in a bungalow in the middle of a forest, sip your wine with your significant other and celebrate the 14th February or you can go Uludağ and dabble in extreme winter sports such as skiing, snowboarding and snowmobiling.

There are indoor places and outdoor places that you can visit and experience such as historical mosques and churches, zoos, botanical gardens and such as well as lakes, forests, mountains. Depending on the type of activity you want to experience and the mood you are in, there are countless opportunities to choose from but I think the best way to enjoy winter in Turkey is to participate in winter festivals.

The winter snow festival is expected to be held for the third time in Bolu Gerede between 2-5 February where you can spend time with your friends and family playing games, sliding downhill, tasting local delicacies, listen to live music and do more.

The festival is expected to be held on the İzmir Bayındır in February where you can enjoy the daffodils and dried flowers and eat delicious food accompanied by music and activities.

Located on the Ankara’s Mamak county, this festival is all about the Turkish Doner. You can eat delicious doner kebab while experiencing music, local events and others foods in this festival.

As strange as it might sound, wrestling camels has been adopted from Arabic countries to Turkey during Ottoman’s rule and it became a part of Turkish culture. Expected to be held on the İzmir Torbalı and Aydın Yenipazar, in these festivals the main attraction is the wrestling camels. Accompanied by food, music and local activities the Camel wrestling is generally happens in February.

Due to the mild weather of Adana, citizens decided to enjoy the winter by going to Aladağ where the snow falls and celebrate it by making snowman. As a community event, there are not much to do except gathering together with loved ones and simply enjoy making a snowman.