What is the Cost of Living in İstanbul?

İstanbul is one of the biggest cities in Turkey which is considered a metropolitan along with cities such as İzmir, Ankara and Antalya. Although İstanbul is not the capital city of Turkey, it is by far the largest city three times larger than the capital city Ankara. With a metropolitan population of 15.5 million, it is the largest city in Europe and the 13th largest in the world. About one fifth of the Turkish population lives in İstanbul with only around 25 percent of the residents originally are from İstanbul making it the most migrated city in Turkey.

Why is İstanbul Important?

İstanbul sits at a strategically vital location with the Bosporus being the only passage from the Mediterranean and Sea of Marmara to the Black Sea. It is the only city in the world that connects two continents with the Bosporus Strait runs through the city separating Anatolia from Thrace. These two sides are often referred as Asian and European side of Istanbul. It is one of the juggernauts of Turkey on economic front. Business in İstanbul accounts for the 1/3rd of the country’s economy. İstanbul has a large industry, tourism and farms all together. Its one of the most visited cities of the world too.

İstanbul has been habited by humans since the stone age with evidence of settlements going back as early as the 6th millennium BCE. It was recorded that it was known as Lygos by the history writer Pliny the Elder. Greeks then founded the city of Byzantium in 657 BCE a city near Athens. An Acropolis was built where the Topkapı Palace stands today. It was then taken over by the Romans in 196 CE and Emperor Constantine the Great moved the capital from Rome to Byzantium in 324 CE while naming it Constantinople. He was the first emperor to convert to Christianity. İstanbul was the capital of Byzantine Empire for over 1000 years. Hagia Sophia was built in 537 by the order of Justinian the Great and remained the worlds largest capital for nearly 1000 years. In 1453 the Ottoman ruler Sultan Mehmed II conquered Constantinople.

Is İstanbul an Expensive City? 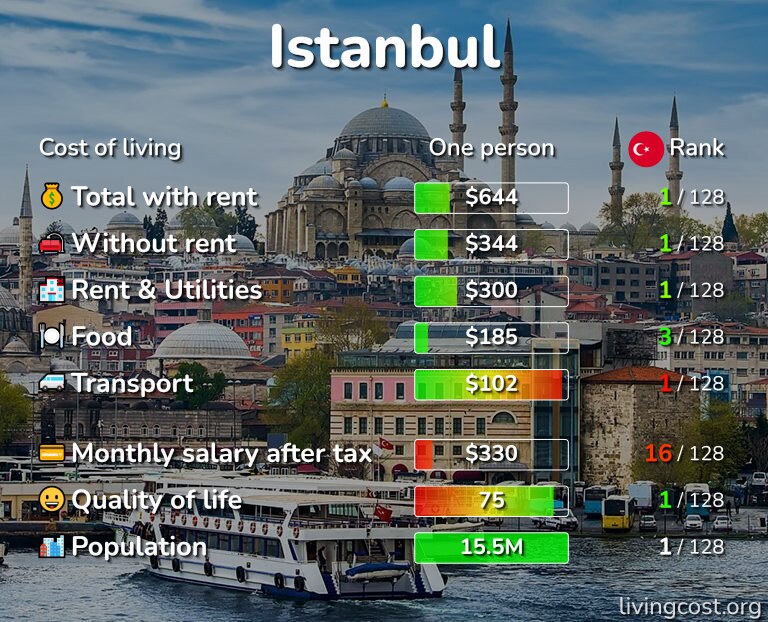 İstanbul is a very large city by its surface area so it varies depending on where you are but, the city center can be described as a very luxurious place to live. If we look at the most expensive districts of İstanbul, we can see Beşiktaş, Sarıyer and Beykoz which are close to the city center where all the social facilities and business opportunities are. These districts are infrastructurally very developed and also the business and social life opportunities add value to their values. Cost of rentals, properties, food, entertainment and more are quite expensive in these regions. It can be said that Beşiktaş leads the most expensive districts of İstanbul followed by Sarıyer, Beykoz, Bakırköy, Kadıköy.

While Bakırköy is considered the most expensive district, it can be said that Esenyurt is the cheapest region in the city center which is a rapidly developing and transforming district. Esenyurt is chosen by many for renters since it is close to city center and public transportation systems are easy to access to go anywhere in İstanbul. In addition to Esenyurt, Silivri is a quite cheap district in İstanbul because of its relative distance to the city center even though it is on the shoreline and has a beautiful nature. Lastly, Arnavutköy can be considered cheap if we compare it to other districts due to its distance to the city center. It is a rapidly developing area and since with the construction of İstanbul Airport and Canal İstanbul Project, the development gained speed and property prices are gaining value.

What are the Property and Rental Costs in İstanbul?

Property and rental costs in İstanbul are the most expensive in Turkey since it is the most densely populated while at the same time being the most lucrative city to do business or work in. Most of the international companies in Turkey are located in İstanbul and with this there are millions of people who come here to work or to find a good job even from other nationalities. That’s why real estate prices in İstanbul keeps gaining value.

This situation puts stress on the housing demands and the supply falls behind causing the rental prices to be higher than an average city. One other reason for the high rental and property prices is the cost of living in İstanbul being high. The average price per square meter of a flat in İstanbul costs approximately 35.000 TRY which equals to nearly 1900 USD while rentals vary from district to district. Rent per month in İstanbul costs between 6 thousand to 30 thousand TRY depending on the location and the apartment but a 3-bedroom flat in city center approximately costs 20.000 TRY which is about 1000 USD for 2023.

Utilities highly depends on a person’s usage style, types of household appliances and the flat itself. For example, an average household requires basic utilities such as electricity, heating and water. Basic utilities costs approximately 1500 TRY which is about 80 USD with standard usage excluding internet, mobile plans and such.

Transportation is very important and can be considered cheap in İstanbul. The city has all kinds of transportation methods that can be used including subways, busses, ferries, taxis and more. The transportation methods provided by municipality costs from 7 TRY to 15 TRY per trip. Currently taxi fare is 6.30 TRY per kilometers plus the 10 TRY starting price while gasoline price is around 19 TRY per liter.

Eating outside in İstanbul is a bit costly but it hugely depends on what and where you want to eat while markets and food prices are almost the same with rest of the country due to the regulations and chain markets. If you want to eat from an inexpensive restaurant, it is about 100 per meal while mid-range meals cost around between 250 and 1000 TRY. Chain fast food restaurants meals costs about 70 TRY such as McDonald’s BigMac menu.

If we want to summarize the cost of living in İstanbul, family of four spends around 25.000 TRY without the rent while a single person is estimated to spend around 9.000 TRY per month. According to the data, İstanbul is %65 less expensive than New York (without rent) while rent is %84 cheaper than New York.