One of the Most Important Languages in the World: Turkish

If you have been to Turkey, then you might notice that Turks are quite hospitable people. They love to chat with you in all circumstances. However, although Turkish may sound quite melodic, it is one of the most interesting languages in the world too.

This is why we wanted to compile some notable facts you need to know about the language. Whether you are planning to learn Turkish or just reading the article for fun, we believe you are going to like these facts.

So, let’s keep our introduction part short and check out these interesting facts one by one. Needless to say, we have also provided information on the structure of Turkish in the following sections.

Çıkmak is a Turkish word with the most meanings. It refers to 58 different actions and meanings. In addition to this, the toilet is the most synonymous word in Turkish, it literally has a different name in every city.

The longest Turkish name is Abdulmuttalip, which is an Arabic-origin name and consists of 13 letters. Moreover, the longest surname in Turkish is Kocakethüdaoğullarından and it consists of 23 letters. 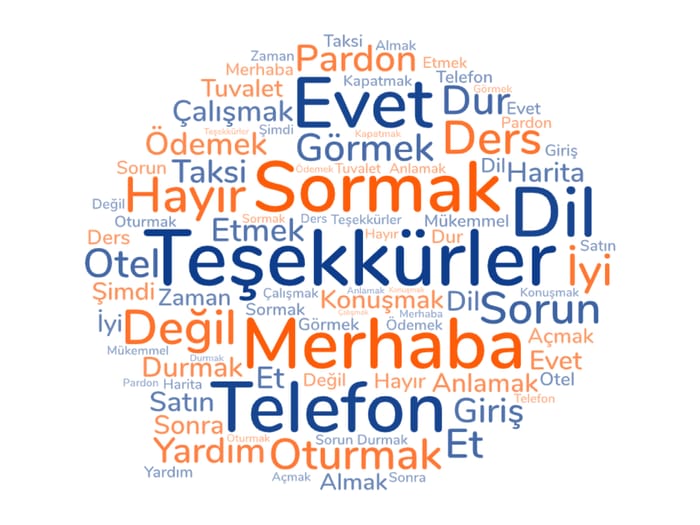 Turkish is the sixth most spoken language in the world and more than 240 million people speak Turkish. It is worth noting that the language can significantly vary and most Turkish speakers from different nations often cannot understand each other. For example, in Turkey, people are speaking Turkey Turkish.

It is an agglutinative language. This means that you put suffixes, in other words, additions to the end of the words.

Chinese, Hindi, English, Spanish, Russian, and Arabic are among the languages ​​used as the mother tongue by most population of the world.

Turkish, Chinese, Spanish, Arabic, and Hindi are languages ​​used in the largest geographical area in the world. English, German, French, Spanish, Russian, Japanese, and Chinese are languages ​​that are widely used in trade, communication, and information exchange in the scientific and technological fields of the world.

Did you know that Azerbaijani teenagers began to say "yes" instead of "beli", which means "yes" in Persian with the influence of radio and television broadcasts from Turkey? People in Turkey can understand an Azerbaijani speaker easier than they did ten years ago. They can even more easily understand guests from Turkmenistan and Uzbekistan.

Opinions of Famous Historians About Turkish

In his work titled "History of the Turks", Historian Jean-Paul Roux stated that the only definition that can be accepted about the Turks is the grammatical one... Since the language of the Turks has a great attraction, it has been adopted by many peoples with whom they interact. Famous linguists praised the competence of Turkish and its superiority over other languages ​​in terms of regularity.

Max Müller once said, reading a Turkish grammar book is a pleasure for those who intend to learn this language. The mastery of determining the rules of grammar, the regularity of the verb conjugations, the transparency in the whole language structure, and the quality of being easily understood, arouse admiration in those who can comprehend the superior power of human intelligence that emerges through language…. In the Turkish language, everything is transparent and clear.

Jean Deny also said The Turkish language suggests that it was formed as a result of the consultation and discussion of a distinguished committee of scholars. But such a committee left alone in the Turkestan steppe and driven by its own laws or its own instincts, could not achieve this result created by the human brain.

Although Turks used to speak Turkish, they used to use a mixed alphabet consisting of Arabic and Persian letters. This used to create a significant problem in society and Turks' famous leader Mustafa Kemal Atatürk, eliminated this problem. He announced, "Our rich harmonious language will show itself with the New Turkish Letters, and introduced the Turkish alphabet based on Latin letters with the law he passed in the Assembly on November 3, 1928.

Compared to Indo-European and Semitic languages, Turkish has a significant advantage in deriving words. Famous Turkish linguist Dogan Aksan explained this superiority in his book and provided 100 examples of derived words from the root "sür-".

The Arabic language congress convened in Cairo in 1936 removed 3600 words of Turkish origin from the Arabic dictionary. Among these removed words, there is also the word "sarık", which used to be widely used to describe turban in Arabic.

Turkish is an amazing language, and it is one of the easiest languages to learn yet the hardest to master. However, if you are going to live in Turkey, we would like to note that you will meet numerous kind teachers.

Locals love foreigners who speak Turkish, and they kindly correct your mistakes once they become friends with you. We do not mean they are grammar Nazis, but they provide a great and live learning opportunity for learners, which significantly contributes to their learning processes.

We also assure you that you are going to love learning Turkish too! It is quite predictable and harmonic. Although you do not have to learn Turkish to live in the country, since most people in tourist destinations speak multiple languages, the process will be quite fun for you. Moreover, you will be able to bond with locals easily.