Sultan Ahmet Mosque which is also known as the Blue Mosque due to its blue tiles used in the interior decorations began constructions in 1609 was completed in 1616. It was built during the rule of Ahmed I. and it is located next to Hagia Sophia. The Blue Mosque is included in the UNESCO World Heritage Site list since 1985. The mosque includes a tomb, a madrasah and a hospice in it. There are 5 domes, six minarets and eight secondary domes that belong to it. Its style includes Byzantine and traditional Islamic architecture together and it is considered to be the last great mosque of the classical period. It was built by Mehmed Agha who was the last student of Mimar Sinan.

Topkapı Palace is a museum in Fatih, Istanbul. It was the administrative center of the Ottoman Empire between 1460’s and 1850’s. It was built under the rule of Sultan Mehmed the Conqueror. Topkapı Palace consists of four courtyards and many smaller buildings. The palace complex has hundreds of rooms and chambers but most of them are not accessible by the public. Only the most important rooms are allowed to be accessible including Ottoman Imperial Harem and treasury where the Spoonmaker’s Diamond and Topkapı Dagger is displayed. The museum includes Ottoman clothing, weapon, armor, miniatures and much more. It is also a part of UNESCO World Heritage Site. Being one of the most important places in Turkish history, Topkapı Palace offers a vast knowledge and insight into the life inside the Imperial Palace. If you visit this historical monument in Istanbul, be sure to have a dedicated time since there are lots of items, places and knowledge to check out.

Hagia Sophia is a major cultural and historical site in Istanbul which was originally a Greek Orthodox Church. It was first constructed as Magna Ecclesia which means “Great Church” due to its size compared to other ones in the year 360. Until the current structure which was built by the eastern Roman emperor Justinian I as the Christian cathedral of Constantinople for the state church in 532, there were many different types of structure that came before. With its completion it was named Church of the Holy Wisdom and became the world’s largest interior space and one of the first to use a full pendentive dome. It remained the world’s largest cathedral until 1520 when the Seville Cathedral was completed. Hagia Sophia was the religious and spiritual center of the Eastern Orthodox Church for nearly a thousand years. With the conquest of Istanbul, it was converted to a mosque by Mehmed II and became the principal mosque of Istanbul. Being one of the worlds and Turkeys most important places, Hagia Sophia dates back to 350’s and it brings an immense history with it. Even though changing hands and changings done to it, its importance stays intact and it is a live proof of our and those who came before us. 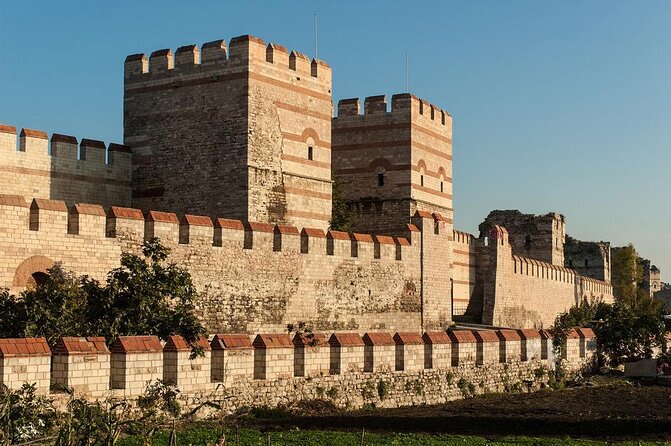 They are a series of defensive stone walls around the Istanbul which were used to protect the city Constantinople since its founding as the capital of the Roman Empire. It was modified, fortified, restored or demolished throughout the history many times. It was seen as the last great fortification system of antiquity and one of the most complex and elaborate systems ever built. It was first build by Constantine the Great and the walls surrounded the city on all sides protecting it from both sea and land. The city was saved many times in history until the siege cannons advanced. The walls began to be dismantled in 19th century due to the ever-expanding nature of the city although many parts of the walls still stand today. Some of the most important parts of the wall includes Golden Gate which is the main ceremonial entrance into the capital used for special occasions, Yedikule Fortress which was an addition by Ottomans, Golden Horn Wall which is facing towards the Golden Horn and much more.

The Basilica Cistern is the largest of ancient cisterns in Istanbul which is located 150 meters southwest of Hagia Sophia. It was built in the 6th century during Justinian I. It was called a Basilica because it was located under a large public square. Before its construction a basilica, which is a large public building, stood on its place. The bases of two columns in the northwest corner of the cistern reuse blocks carved with the face of Medusa. It is suggested that they were brought from a building from Roman period. The cistern is a popular place in Hollywood as well. It was appeared in From Russia with Love, Assassin’s Creed: Revelation video game, Brotherhood of Tears and the latest in Dan Brown’s Inferno novel and film adaptation.

Istanbul has a deep history with countless nations, empires, races, religions accepting it as their home. Throughout the history, being a cultural and a historical powerhouse Istanbul was repeatedly targeted due to its value. We can take a trip around the city and we can see tons of historical monuments in Istanbul. It is one of the world’s most important and valuable cities and it must be seen at least once in a lifetime. If you want to know the history of the world, you can start with historical monuments in Istanbul.